Hey, everyone! With Kristy on a blog break this week, I’m bringing you the Friday movie review today on my own and we think it’s a fantastic movie that a lot of people either haven’t seen or have forgotten about. But, this weekend is The Oscars and this is one of the best winners from the past. 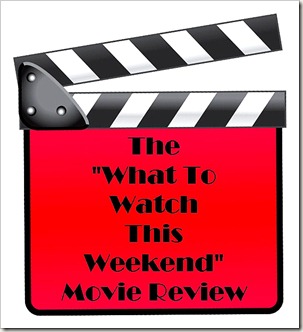 Plus, after the review, I’m going to give me my predictions for the winners of the 2013 Oscars. So let’s get started! 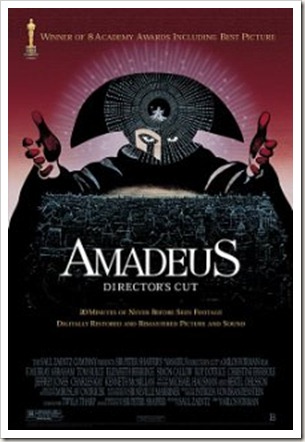 A guilt stricken elderly man attempts to commit suicide while apologizing for the death of Wolfgang Amadeus Mozart. He is then taken to a local asylum and priest is brought in to hear out the man’s confession. Over the next 18 or so hours the man tells his long confession.

When the elderly man starts his tale, he still has his sanity but the longer his time with Mozart increases, the man’s obsession slowly eats away at him. Our story’s narrator has devoted his life to God in exchange for being a successful composer and to make music that will glorify both God and himself. But, while he struggles, he recognizes in Mozart as a musical genius, a voice of God. He seeks out Mozart and realizes he is lewd and comical, not religious or disciplined like our narrator. Outraged, the man quits being devout to his faith and devises a plot to strike back at God, unfortunately involving Mozart.

11 nominations and 8 wins for this 1984 Best Picture. It is a period piece that has every element of a good movie. I viewed the Director’s Cut that was rated R, as opposed to the PG rating of the original theatrical release .

Not many films can say they have 2 leading roles and even fewer films have both of those leads nominated for best actor, with, of course, one of them winning. This movie illustrates that even the most amazing people are still just people. The film also does an excellent job of illustrating some of the things people do that can lead them to damaging their behavioral health, such as, obsession, greed, pride, and believing you know God’s will. This is fantastic best picture and one of the most unpopular. It never broke into the top 5 successful films of the year. Only two other best pictures have done that. The reason for its unpopularity was that it was a movie, almost 3 hours, about MOZART. I love classical music, operas, and ballet and I enjoyed this movie. But, even so, there are a TON of scenes that seem like they just GO ON. So, if you like me and are watching the film because you enjoy the period in which the film takes place, you will not mind, as I did not. However, if you’re just decide to watch the move because you’re curious about the hype, you may very well have problems keeping focused and entertained (as was also a common theme in the movie. LOL) But this movie is well worth the time invested.

Kid Friendly = Sure. Many will find it quite boring, though, although Hulce’s Mozart is, at times, almost cartoonishly funny. I really have no idea why the directors cut is rated R. It says brief nudity. There was a flash of breast, in one scene. I can think of at least a dozen PG 13 movies with more nudity.

Just a side not, The Oscars are this weekend and I thought I’d give you my predictions as to who should win.

Best Picture is a nail biter but I just have a feeling that ARGO is gonna pull it off.

Those are my pics. The other categories 100 percent require me to view all the films. Yes, I know I should see every film to make the pics I have but when you’ve seen actors enough times, you know what they are capable of.

Have a great weekend and we will see you next week!