Hi-de-ho, my loves! I hope you have had a fantabulous week! We had a good one, although The Hubster has been struggling with a broken tooth for the past week and had the first part of his root canal yesterday. He has been trying to be a good boy, but he has been a bear despite his best efforts. Hopefully he feels better this weekend, since they’ve gotten the the biggest part of the root canal finished, because I really want to see Chad’s pick this week!

I’ve got a load of stuff to get done on my schedule today, if I want to have any time to actually go see a movie at all. LOL So, without further ado, I’m handing you off to Chad! Have a great weekend! 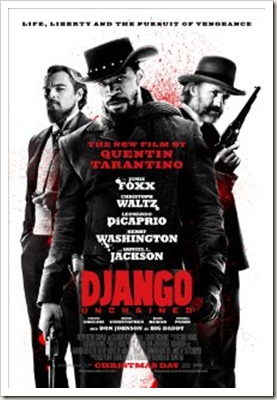 Set up: the South, pre-Civil War. King Schultz (Waltz) is a bounty hunter who requires the knowledge and assistance of a slave named Django (Foxx). He buys him, with the intention of training him to be his deputy bounty hunter. Schultz cares very little for slavery. He requires the slave’s knowledge and assistance to collect his bounty and will gladly give him his freedom, along with a percentage of the bounty, in return. Time goes on and a bond grows between them grows. Through conversation, he learns that the slave, Django, will try to buy his wife once he is freed. The two men decide to get her back together. She is at a famous plantation known as Candie Land, owned by the ruthless Calvin Candie, (DiCaprio) and the men decide on a plan of action to get her back. Nothing goes to plan and a blood bath ensues.

Tarantino has done it again! The whole cast was outstanding! I had reservations about Jaime Foxx, but he did a fine job. Leonardo not getting an Oscar nod is just ridiculous. He played a great villain. There was only one scene I kind of had questions about. The rest of the movie flowed very well. For it being closer to 3 hours than 2, I could of watched more! The movie is ridiculously violent, a Tarantino trademark, but is sprinkled with fantastic humor throughout. I won’t say anything about Oscar stuff, since the nominations have just been released. Full disclosure: I’m a HUGE Tarantino fan and I’m glad to see him back in top form here. If you are a fan, too, then this movie is a MUST-SEE at the theatre. In fact, even for the casual movie goer, I would still say it’s worth the money to see on the big screen, provided you understand that Tarantino’s trademark are violent, drive-in era style action movies. “Django Unchained” doesn’t disappoint in that. It has the kind of big movie feel that you just can’t recreate without a theatre.

Kid Friendly = NO. NOT AT ALL. There is very bloody violence throughout the movie and some of it is against defenseless slaves. Remember, this movie takes places 2 years BEFORE the onset of the Civil War. The “N word” is used CONTINUOUSLY throughout the movie, as well. Definitely not an appropriate movie for anyone under the age of 17.