(Howdya like that aliteration, huh? LOL Just ignore me. I’m in a silly mood as I write this.)

Well, if you remember my POST yesterday, you saw the coffee table I picked up at Goodwill to replace the Ikea table that the was broken during my son’s Star Wars marathon. Anyway, after we unloaded the table, I went right over to Home Depot and picked up some paint for it. As you can see, green and stained wood isn’t going to work in this room: 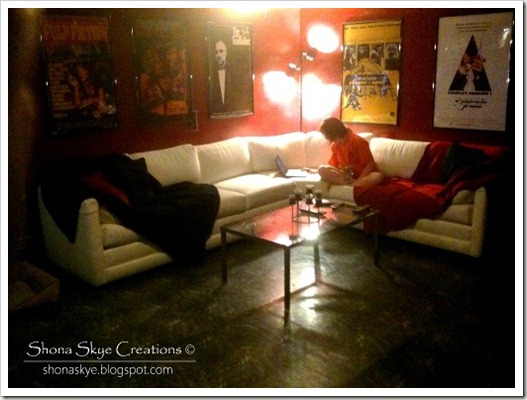 Sorry for the abysmal picture. LOL I snapped it on the fly awhile ago. That’s The Girl Child there with her laptop. There is always someone in that room. The only thing missing is the black carpet beneath the table. But, with red, white, black, and gray as the color scheme, you can see that the table is in need of a makeover just to fit in with the décor. Unfortunately, it’s also about 28 degrees here, which is seriously cramping my style.

Nonetheless, I went ahead and grabbed a few cans of Claret Red spray paint, primer, and a nice satiny black for the table top. To be honest, I don’t know whether the paint is drying or freezing. LOL 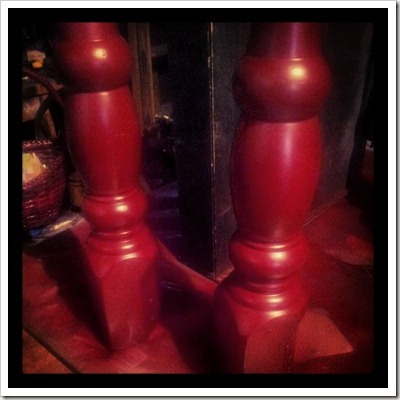 This picture is probably blurry because I was shivering as I was taking it.

And that’s as far as I’ve gotten until I can thaw out a little. LOL

I had to share this picture I took the other night when we went out shopping. The Hubster, The Little Brother, and I went out for some coffee and to see what we could rummage up at Garden Ridge. I didn’t find anything special, The Hubster was getting restless, and The Little Brother came found this: 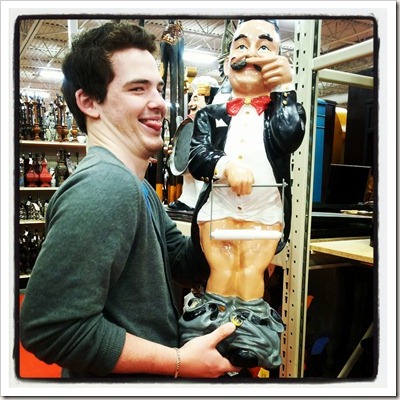 Leave it to LB to find the most bizarre thing in a store the size of umpteen football fields. He has a sixth sense for finding anything that is just wrong. LOL Honestly, would you ever put that in your bathroom?? OMG…

In Bummer news, The Hubster is facing some major oral surgery. He was absolutely miserable with a really bad toothache just after New Year’s. When he finally went in to see the dentist, he found out he needs two root canals and then gum surgery – a procedure that both his brother and sister had to have, as well. Poor guy has to go in for his second appointment on Wednesday. I had gotten so many bills paid off at the end of December and was really hoping for a little breathing room in 2013, but I guess I was hoping for too much. I don’t think our dental insurance is going to cover much more than about 50% of the costs, if that. So, between tuition fees, dental fees, and a myriad of other expenses, the Fates are conspiring together to keep me from getting breathing room. A heart attack suite, maybe. But not breathing room. Ugh. Ugh. Ugh.

But, never finish on a downer, so I saved the best for last!

I won a giveaway!! ME! A giveaway!

No, no, you don’t understand. I never win anything…EVER.

OK, so, I’m a big fan of Ms Miscellany Designs. Marcy has got some of the coolest funky upcycled jewelry around and she’s always got a giveaway going on. (You should check her out, you really should.) Anyway, I entered to win one of her upcycled vintage rings (VINTAGE!) and I won! Of course, she notified me when my stupid computer was in the shop, so I didn’t even know it. Can you believe she was kind enough to hold it until she heard from me?! I can’t tell you how tickled I am with this ring! It’s SO me! I LURRRRVE it! 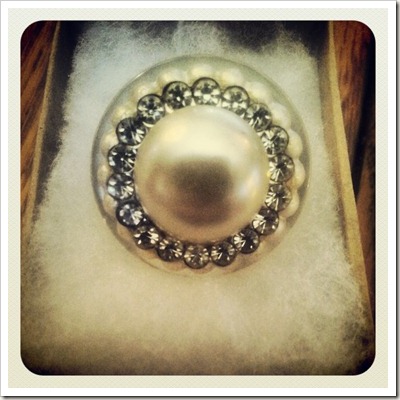 Here’s me wearing it. (Please ignore the ragged nails and dishpan-y hands. Good grief. I’m like that Madge lady in the old commercials, except I don’t wash dishes, cuz I have a dishwasher and no excuse for hands like this…LOL) 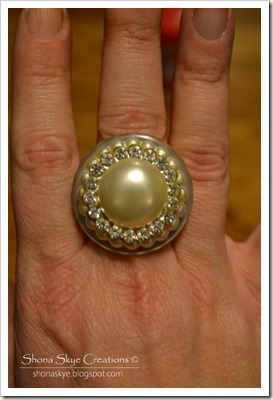 So, please take a sec to check out Marcy’s blog and Etsy shop! And a big thank you to Marcy, herself, for being so sweet and patient!!

Meanwhile, I’m going to try to keep working on the table while wrapped up like an Eskimo. I’m playing with the idea of decoupaging mini-movie posters onto the table top, since it is a media room. I have about a zillion posters saved on my computer to choose from…I don’t know, though. That might be too kitschy. What do you think?