In case you missed it, I started this series off with my daughter’s personal story of online bullying. And yesterday, we defined what behaviors constitute bullying. Today, I want to take a look at just who might be a bully.

We talk a lot about the topic from the standpoint of the victims – how to deal with a bully, what happens to bullied kids, violent outbursts from bullied kids. Rarely, though, do we stop and think – who are these kids doing the bullying?

We want to protect the child at school who is bullied. When a bullied child acts out, either in violence or other action, we want to hold them responsible (and they should be), but the fact of the matter is this – bullying starts with the bully. And the bully is another child – a classmate, neighbor, or teammate – and they have families, too. These kids don’t exist in a vacuum.

Who is a Bully?

Everyone wants to believe that their little angel is sweet, respectful, thoughtful, and caring. But, the fact is, bullies have parents, too, and their blissful ignorance or outright support of bullying behavior is a major factor. There are many family indicators and children who come from homes with some of these risk factors often show bullying tendencies:

Parents across the board need to understand that

Parents who don’t understand this simple fact are part of the problem:

For example, parents who treat or speak of other people badly – like the messy neighbors down the street or the family member struggling financially – or of entire communities – including LGBT, minorities, those of other faiths, etc. – are tacitly teaching their children that it is acceptable to treat these people badly. While everyone has a right to their own religious or personal beliefs and standards, no one has the right to teach a child, either deliberately or inadvertently, that those in their communities and schools can be treated with contempt because they or their families are different.

We hear the terms “war on this” or “war on that” on the news every single day. What is that telling our children? It’s telling them that there are battles to be fought against those we perceive as different. We are drawing more and more dividing lines between each other every day and then we wonder why our children mimic this behavior on their smaller social scale?

In other words, it’s not enough to say, “Don’t be a bully” and then turn around and talk trash about others at the dinner table.

To teach our personal beliefs and values, we don’t have to denigrate those of others. If we teach from a place of positivity, we don’t need to “make examples” of others. 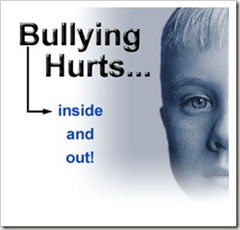 Don’t let your child be one more statistic.

The onus is on the parents to catch the behavior – both their own and their child’s – and be able to understand it for what it is. If your child is acting like a bully, you can’t defend that behavior. You can’t blame the victim. Parents must take responsibility and get the tools and support needed to make the necessary changes. Expecting that the victims tolerate the abuse until their bully “grows out of it” is wrong and unfair. As a society, we can’t turn a blind eye to bullying any longer.

As parents, we need to remember that our words matter. Our children are listening. If they are feeling bullied at home, if they are feeling neglected or unworthy themselves, if they are overhearing that children in their class are somehow less worthy because of their home lives or place in society, we need to keep in mind – those feelings and lessons are going to come back out, one way or the other.

But, if we teach kindness, courtesy, and compassion by our actions and our words at home, we have a much better chance at sending a kind, courteous, compassionate child out into the world.

Tomorrow: Who is a Victim?

2 thoughts on “A Frank Conversation About Bullying – Who is a Bully?”