Skip to content
As you may know, for Mother’s Day (and then some), I undertook remodeling my mother-in-law’s kitchen while she was visiting her family back in Scotland. I knew this would be a big project. While I didn’t have to replace appliances or do a major build, there was a lot of work to do, but I have to say – it came out awesome and very much reflective of my mother-in-law’s bright and cheery personality! 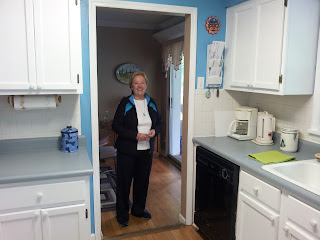 (As usual, I forgot to take true “Before” shots, but you get the idea.)
My design centered around my mother-in-law’s love of color and the idea of a cool, oceany scheme. You can see my paint chip samples on the round kitchen table up there. Yeah, that table – not gonna work. 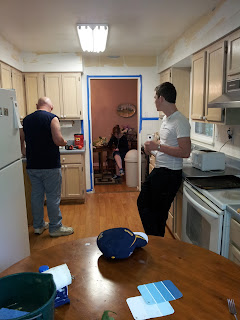 First we started on the cabinets. They are really good solid wood cabinets, but had shoddy installation and were never finished properly by the installer. They were supposed to be pickled oak. He put on about three coats of polyurethane and left the rest to my mother-in-law. Uh-huh. Because all mid-70s ladies run around polyurethaning everything that they paid someone else to do, right?

We fixed installation issues, made repairs where needed, and refinished them in bright white enamel. 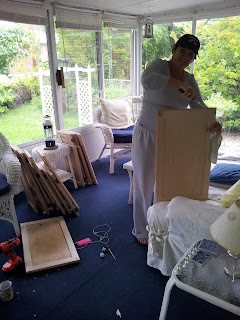 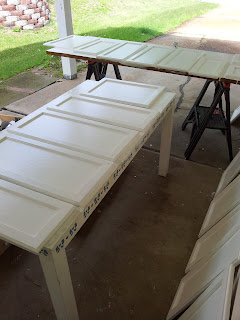 Cleaning all that wood was imperative. My mom-in-law cooks huge meals for the entire family and does it the old fashioned way – with a lot of cooking grease. Without cleaning and sanding the wood, the enamel would have just chipped away. We got Greased Lightening and Dawn when necessary, then sanded where needed with a med-fine grain sandpaper. For once, the crappy job the installer did worked in our favor. Ten coats of polyurethane would have been murder to get off. (It was hard enough chipping the droplets of polyurethane that he didn’t bother to wipe away during the three coats he did bother to apply!)

For the wall color, (anything but white, please!) I went with a favorite color of my mom-in-law’s – a bright but cooling aqua-blue. There is so much wall space that the walls needed to be a statement themselves and, with the white cabinets, I knew they would really pop!

In the dark stairwell, I chose a lighter aqua-based blue. It brightens the stairway, but compliments the kitchen color scheme. When you have open doorways, visually you always would like your color schemes to complement each other. In my own house, my living room is a khaki color with a large open doorway to my kitchen, which is kind of an Army green. Red and black accents work in both rooms and ties the two color schemes together.

Originally, Nano had her refrigerator by the door to the basement stairwell. It broke up the room, blocked the flow, and looked like it was just stuck there. However, this kitchen has no designated spot for a refrigerator. So, my husband switched to the doors to open from the opposite direction and moved it by the window. That keeps the work and storage on one side of the room and leaves me with a place to put a table that all the grandkids can sit at!

Remember that table with the country blue accents in the picture up there? As I painted (and painted and painted) all those cabinets and drawers, it dawned on me how perfect that table would actually be in the kitchen!

Nano had a round dinette set that she really bought on a whim. It went with nothing in her kitchen before and it certainly wouldn’t after. Plus, the round shape limited how many could sit around it to four and it didn’t work in the layout of the kitchen itself.

This little gem had been in the laundry room downstairs for years. We dug it out to have another surface to paint cabinets on. I had decided on the Apple Green for her accent color and, following the geometric lines of the table itself, this was a perfect place to bring in a real punch of color! Pull it away from the wall, and you can comfortably sit six around the large surface. Plus, it hit my favorite price point – FREE! 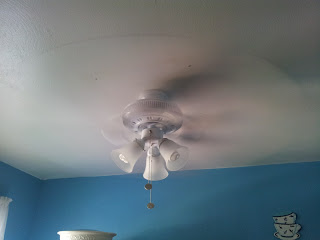 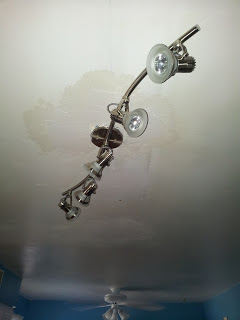 My husband took down the old, broken, fluorescent light fixtures to put up our new lighting choices. The Crappy Installer had struck again – in the task area, there was no electrical box in the ceiling. He had wired the light and secured it straight to the drywall with a few screws. So, my husband had to run new wiring and install an electrical box, but now the track lighting is up right and tight! It provides directional light right where she needs it and the wave design, set diagonally, adds another modern touch to the new decor.

The ceiling fan at the other end of the kitchen has been a godsend. Nano’s kitchen gets really hot (probably due to cooking on high with cooking grease – LOL). The fan has cooled the room down in the summer and made it enjoyable to sit in again. Plus, it looks awesome! 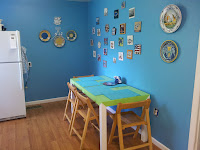 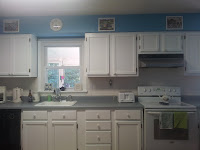 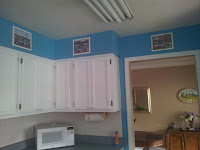 My mother-in-law loves her trivet and china collections. She buys a new trivet for every trip she makes and the china pieces are odds ‘n sods she has received as gifts, etc. I made sure to incorporate them back into the room, as they serve as a visual reminder of places she’s been and people she loves. To me, the best kind of decor is personal and meaningful.

While visiting her family in Scotland, her sister, Mary, gave her a set of six Scottish life prints. Luckily, every print had blue in it, so I scooted up to the dollar store and grabbed six plain, wooden frames and painted them in the same white enamel we used for the cabinets and trim. Perfect! And all for $6.00!

The final touch were new kitchen linens – placemats, oven mitts, hot pads, towels, and dishclothes – all with the blue and apple green color scheme. Then a couple of blue and green dollar store pots with her kitchen plants, a couple knickknacks (Mail Sorter, Dog Treat canister, etc) and a sand colored task mat in front of the sink, and we were DONE! Just in time for Nano’s arrival! 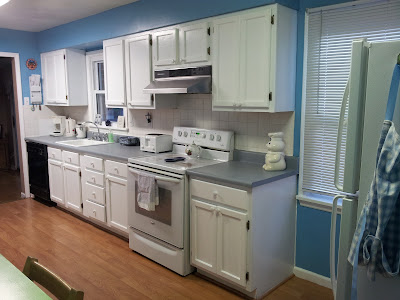 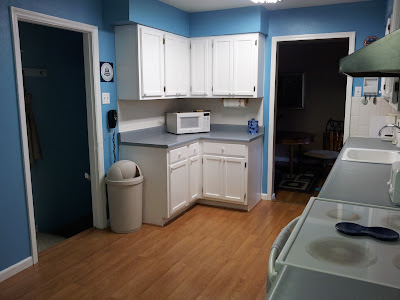 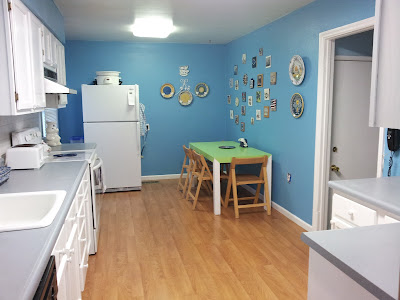 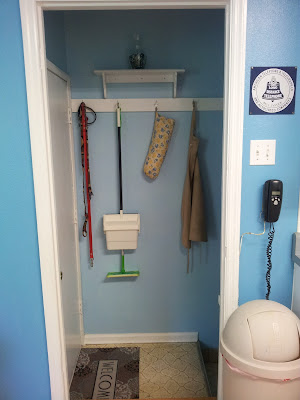 But, my favorite feature of Nano’s Kitchen Remodel? This: 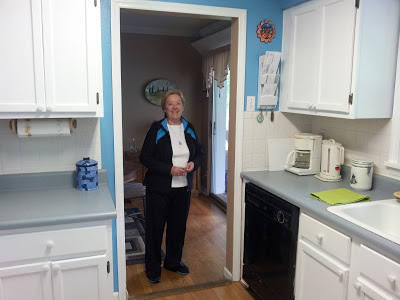 I would love to hear your comments!! I’d also love for you to subscribe to my blog and/or follow me on Facebook or Twitter! Keeping up with all YOUR creativity inspires me! Thanks for tagging along!

** Click HERE to see where I PARTY!**
(Shona Skye Creative by Kristy M Creighton is licensed under a Creative Commons Attribution-NonCommercial-NoDerivs 3.0 Unported License. If you are reading this on a site other than Shona Skye Creative or my SSC-related social media accounts, and it is not a guest post, then the content has been stolen. Please report it at http://www.shonaskye.com/ Thank you!)